The Chilco Street Streetscape project is an example of a successful partnership between private development and government to complete major street improvements. In early 2015, Facebook submitted an application for the proposed redevelopment of a site located at 301-309 Constitution Drive, which included construction of 2 new office buildings of over 900,000 square feet, a 200-room hotel, and publicly-accessible open space and a new pedestrian bridge over Bayfront Expressway. Chilco Street is a two-lane roadway connecting Menlo Park’s Belle Haven neighborhood, across the inactive Dumbarton Railroad right-of-way, and Bayfront Expressway. Chilco Street had a posted speed of 40 miles per hour and standard bicycle lanes, but no sidewalks or walking facilities. Being a link between the Belle Haven neighborhood and a 160-acre park and the regional San Francisco Bay Trail, the City had identified the need for improvements to this street. Following submittal of an application for the site’s redevelopment in early 2015, the City and Facebook agreed to expedite frontage improvements that would be required of the project. Since Facebook has other occupied buildings in the vicinity of the area, Facebook desired to improve pedestrian and bicycle circulation along Chilco Street and agreed to partner with the City to expedite the frontage improvements prior to construction of the project being approved. The City expedited all plan review, waived fees and oversaw the design, while Facebook funded and managed construction of the improvements. With this partnership, the first phase of the project was permitted and constructed in 8 months. Completion of this first phase allowed a continuous walking and bicycling facility on the north side of Chilco Street. The improvements along Chilco Street included a 6’ sidewalk and 10’ two-way separated bicycle lanes (Class IV). The bicycle lane was separated from vehicle traffic using a concrete curb, and where feasible, provides green stormwater infrastructure and landscaped areas. New LED lighting fixtures were installed as part of the project. The sidewalk and bike lanes provides a continuous connection from the Belle Haven neighborhood to the Facebook campus, recreational areas, and public high school due to open in fall 2019. The Chilco Street Streetscape project embodies the goals of the Save California Streets program. The project’s key objective was to improve multi-modal safety along the corridor. The separated bike lanes were installed with a barrier to guard users against high travel speeds. Narrowing the travel lanes provides the ability to measurably lower the speed limit once the project is completed. The project achieves sustainability goals by improving conditions for walking and bicycling and reducing the need for driving to local recreation options. Green infrastructure allows for better stormwater management. LED lighting conserves energy over traditional lighting fixtures. 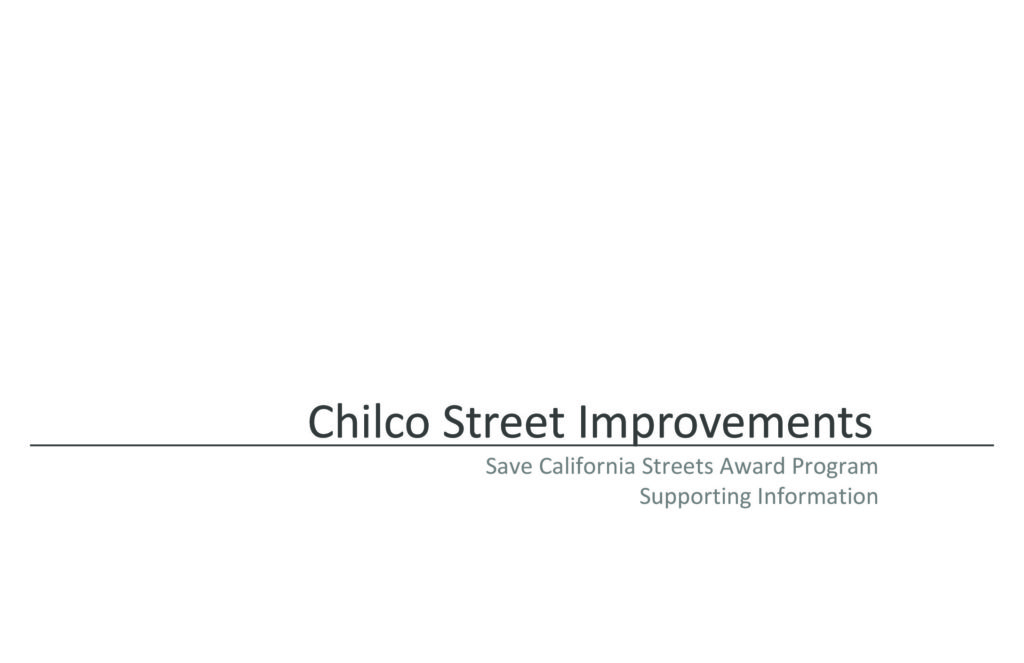