The City of Lancaster submitted the Avenue I Corridor Improvements, 15th Street West to 1Oth Street West project in response to LACMTA’s 2011 Call for Projects. This project was submitted under the Transportation Enhancement (TE) mode and was successful in receiving a recommendation for STIP funding through the California Transportation Commission (CTC). Avenue I functions as the northern gateway to the core of the City from State Route 14 and provides convenient access to residential homes; commercial and retail businesses; professional offices and automotive services; as well as entertainment and recreation venues. The previously existing right-of-way (ROW) improvements along Avenue I were inadequate, incomplete and deteriorating. This Complete Streets project made “right size” safety improvements along the travel way of Avenue I, between 15th Street West and l0th Street West, as well as ensured enhancement of streetscape within the existing ROW. These improvements included: reducing travel way to two lanes in each direction; narrowing sidewalk and adding landscaped planters/street trees in tree wells; construction of new centerline raised landscaped medians; additional parallel parking in front of non-residential parcels; upgrading existing frontage road medians by replacing portions of stamped concrete with landscaping/additional street trees; installing concrete bus pads, bus stop amenities, and replacing bomanite at frontage road bus stops with concrete to allow for more convenient pedestrian and disabled use; installation of new sidewalk where there were gaps in path of travel; flattening cross-slope of travel way; installation of striped bike lane buffers; and 5 to 6 foot wide bike lanes in each direction on Avenue I. ADA accessibility was addressed throughout; intersections were upgraded to include pedestrian refuge areas/islands, crossings were shortened, and man hand timers were replaced with countdown timers. The intent of these improvements were to provide “complete streets” that accommodate multiple modes of travel, improves safety, increases visibility of businesses and service providers by slowing traffic, and is attractive to citizens. In anticipation of the Avenue I Corridor Improvements, 15th Street West to 1Oth Street West project, Council adopted Resolution No. 13-46 on July 23, 2013, declaring its intent to create Underground Utility District No. 2013-01. Funding for the undergrounding of SCE facilities were covered by the City’s Rule 20(A) funds; future Rule 20(A) annual allocations shall be mortgaged up to a maximum of five (5) years’ allocation, as needed, to complete SCE undergrounding within the District. 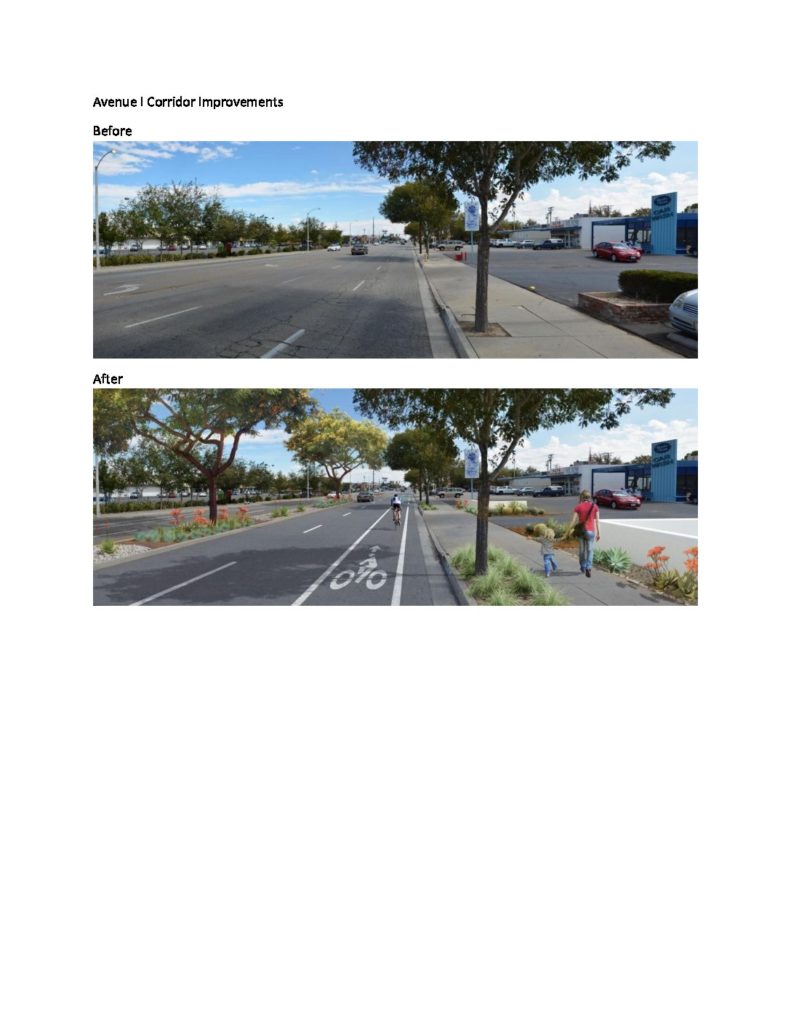