The City and County of San Francisco adopted a road safety policy, Vision Zero, in 2014 as part of a committed effort to increase safety and reduce fatalities. The goal is to effectively eliminate all traffic fatalities by 2024. Vision Zero promotes a safer, livable and sustainable transportation system for residents and visitors of San Francisco. In San Francisco’s SoMa district, 9th St & Division St is identified as one of the higher risk intersection within the High-Injury Network. This intersection is part of a larger bicycle facility on Division St that is well-used and an essential bike route for many bicyclists traveling to the SoMa & Mission Districts. Division St is a popular cycling route with complex vehicle movements resulting in a high number of user collisions, making this intersection a priority for safety improvements. Between 2008 to 2013, there were 12 collisions along Division St as bicyclists and vehicles approach 9th St. Of the 12, 10 were bicycle related where vehicles made right turns. To support Vision Zero, a collaborative effort between the San Francisco Municipal Transportation Agency (SFMTA) and San Francisco Public Works (SFPW) put forth, a first of its kind, design in San Francisco for pedestrians and bicyclists. We developed, designed and constructed the first protected intersection at 9th St and Division St. This transportation system simplifies traffic flow while providing a physical barrier between cyclists and pedestrians from moving vehicles using parked vehicles and concrete islands. Collisions at this intersection were largely due to high speed right turns. At this intersection, the goal was to reduce speeding, increase visibility of pedestrians and bicyclists, provide protections and eliminate collisions. Several improvements contributed to this goal: • Raised crossings going Southbound and Northbound on 9th St/San Bruno Ave • Corner safety islands with new curbs to differentiate the different traveling modes • Painted bike lanes& pedestrian safety zones • Parking protected bikeway along Division St (Caltrans Class II bike lane into Class IV) • New 13’ wide pedestrian sidewalk on 9th St from Division St to Brannan St • Converting 9th St from a one-way to a two-way street by narrowing the roadway • New asphalt pavement in adjacent areas This project has many positive effects on the environment: • Less vehicles and more bicycles on the road means lower CO2 emissions • Reduces collisions due to increased visibility & reduced speeds • Sets a precedence for future safety projects • Promotes cycling The project cost was roughly $350,000, but no cost can amount to the lives and safety of any persons. Through tremendous cooperation and support from the team and community, the project was unveiled in December 2016. This project establishes a prime example for safety improvements in San Francisco, as well as other Cities and Counties. San Francisco strives towards Vision Zero to become a safe & sustainable city. 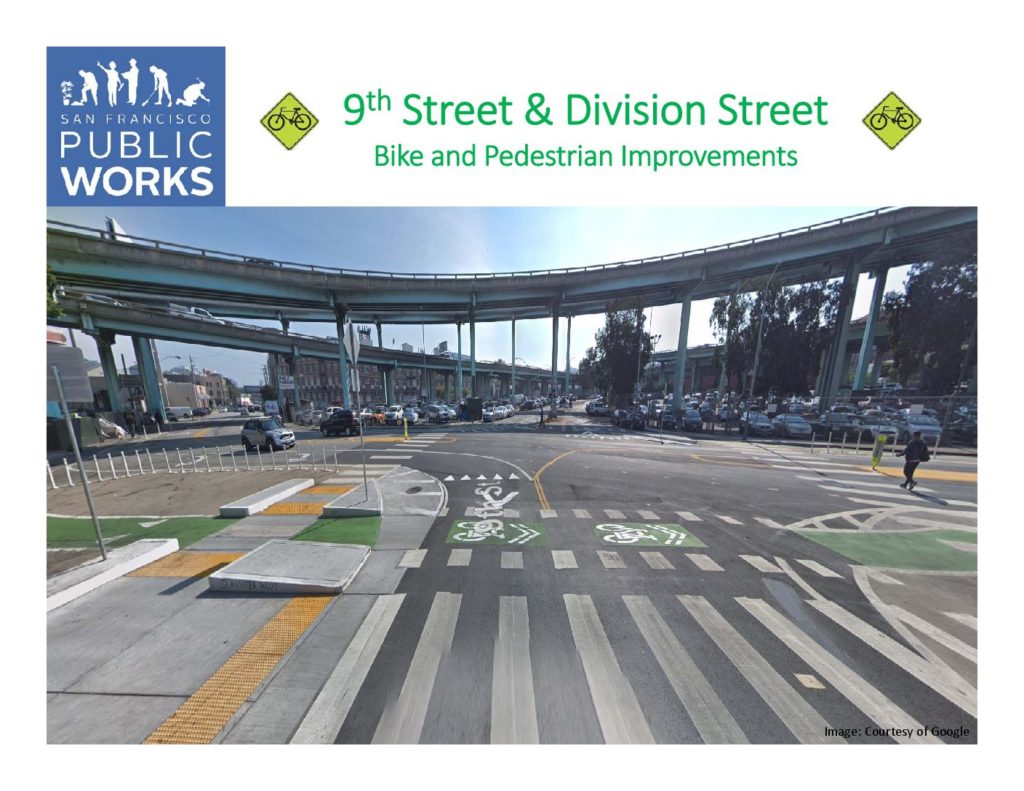