Yerba Buena Road Improvements—Challenges at Every Turn! The County of Ventura Public Works Agency tackled a challenging goal in 2019 and 2020—to improve road safety and rehabilitate 15 miles of winding roads in the Santa Monica Mountains near Malibu in steep, rugged terrain. To improve safety, new guardrails were installed at 35 hazardous locations. To maximize sustainability, a flexible stress-absorbing layer of rubberized chip seal (ARAM) was placed on the full 15 miles of the old pavement, which was then overlain by a layer of asphalt which contained high-strength aramid fibers. The work cost $7.5 million, placed 13,600 feet of guardrail, and placed 17,000 tons of asphalt on two narrow, winding mountain roads—Yerba Buena Road and Deer Creek Road. The work was accomplished by four separate contracts in the same area within 2019 and 2020. Creative scheduling and staging were needed to construct the contracts, one after another, due to minimal detours and natural disasters, described below. The existing roads were last paved in 1987 (34 years ago) and had widespread pavement damage. In-place recycling was not an option due to the winding, steep nature of the roads, not conducive to a train of large vehicles. In order to minimize pavement and base repairs, we placed a layer of rubberized chip seal (to absorb reflective cracking) followed by a 2-inch overlay of AC pavement which contained aramid fiber, to spread tensile stresses and decrease cracking of the new pavement. At approximately a dozen locations new drainage inlets, culverts, and berms were installed to improve drainage and roadway safety. Complicating the work was the narrowness of the roads, the lack of detours, and a funding deadline. The work itself was challenging enough, but Mother Nature greatly complicated the work with a massive brush fire (the Woolsey Fire) that burned the mountains to a moonscape in November 2018. It destroyed over 1,600 structures and caused the evacuation of 295,000 people. The fire was followed by heavy rains, two months later, that caused mud flows, rock slides, and washouts along the roads where we were to pave and place guardrails. Yerba Buena Road and Deer Creek Road run through these burned—then eroded— mountains. Existing guardrails were burned and the bare hillsides were badly eroded by heavy rain shortly afterward. In early 2019 a 17-ton wheel loader that was clearing mud and debris from the road dropped into a large sinkhole where a culvert had washed out beneath the road. We removed the loader with a crane and replaced the culvert (7-foot diameter). Also, a large rockslide blocked the road and many truck-sized rocks had to be blasted before the road could be cleared. Upon completion of the pavement rehabilitation, new guardrails, and new drainage improvements, the recently-traumatized residents of the Malibu mountains expressed their great appreciation for the new road improvements! (Photos attached) 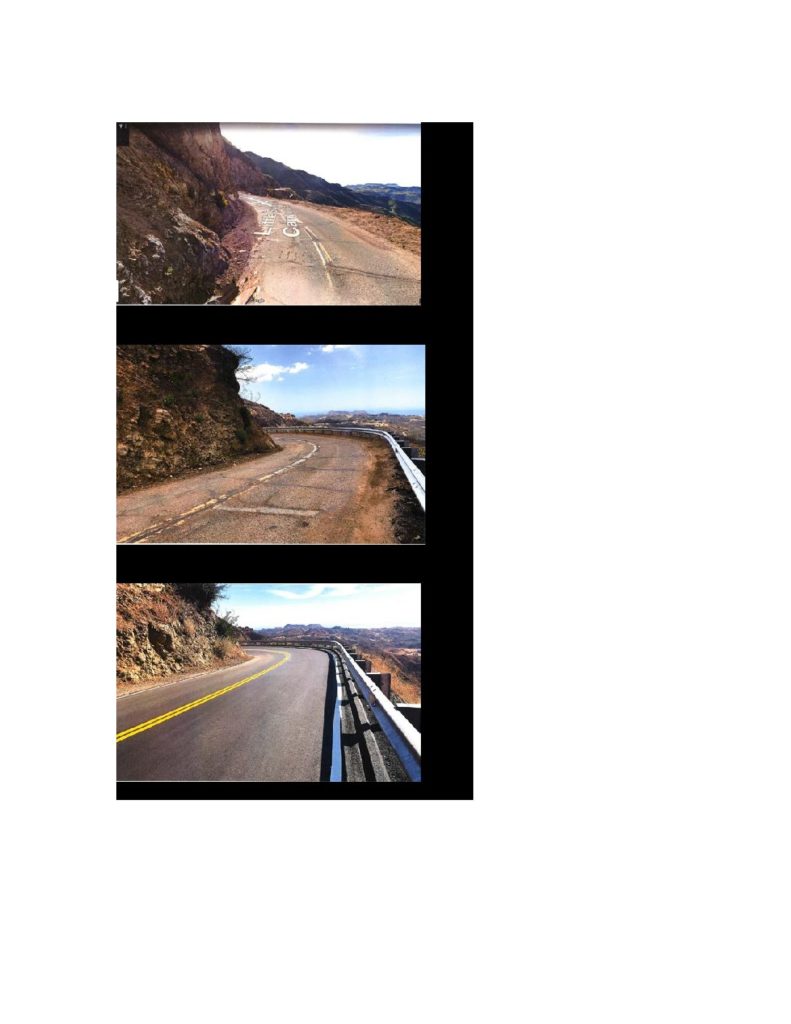