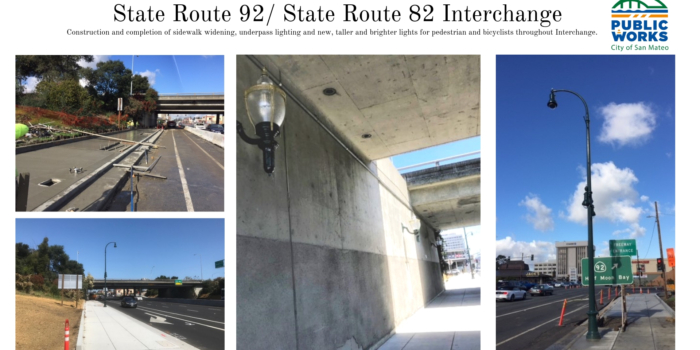 The City of San Mateo has experienced unprecedented growth in recent years thanks largely to its proximity to Silicon Valley. To ensure intelligently managed roads, the city prioritized the upgrade of one of its busiest connectors: State Route 92/State Route 82 Interchange. Work was completed in 2018. The Interchange was a classic cloverleaf marking the middle of the city. Originally named the Route 105/Route 2 Separation, the Interchange was built in 1961/62 when city population was 69,000. In 2016, city population was just over 103,000. The Interchange connects eastbound SR 92 to Eastbay counties and westbound SR 92 to coastal communities. To locals, SR 82 is known as the El Camino Real (ECR) whose historic roots trace the 600 miles that once connected 21 Spanish missions from San Diego to San Francisco. Today, the ECR in San Mateo is home to an abundance of locally owned small businesses and the newly expanded Hillsdale Shopping Center. The city worked with partners at the San Mateo County Transportation Authority (TA) and Caltrans to achieve completion in the timeliest manner possible and within the construction budget. The upgrade reconstructed the Interchange within the existing alignment as a partial cloverleaf interchange by eliminating the westbound SR 92 loop off-ramp to southbound ECR and the eastbound loop off-ramp to northbound ECR. The project re-aligned and widened the on-ramps and off-ramps, signalized the off-ramp intersections, and constructed retaining and sound walls along the ramps. In all, the following major components were completed: removed short weaving conflicts between the on and off loop ramps within the Interchange on SR 92, thereby addressing safety concerns; realigned and widened the diagonal off-ramps to provide additional storage and constructed signalized intersections at the off-ramp terminals; added exclusive right-turn lanes to the loop on-ramps on SR 82 (ECR); constructed concrete barrier between the on-ramps and diagonal off-ramps in the southwest quadrant and northeast quadrant; realigned and widened the diagonal and loop on-ramps to add storage lanes for future ramp metering; provided maintenance vehicle pullouts and California Highway Patrol enforcement areas on the on-ramps; constructed sound wall and retaining walls at the diagonal on-ramps and off-ramps as needed; added provisions for safe bicyclist travel in the northbound and southbound direction on SR 82 (ECR) within the ramp intersections; installed bicycle lanes and wider sidewalks and pedestrian-scale lighting on SR 82 (ECR). The city was the project sponsor handling funding and management of the upgrade. The approximately $25 million project was funded through local funds from the city and TA, a Demonstration Grant and State Highway Funds. Caltrans conducted a Project Approval and Environmental Document, design and construction management through agreements with the city and TA. The improvements took place within Caltrans right-of-way. 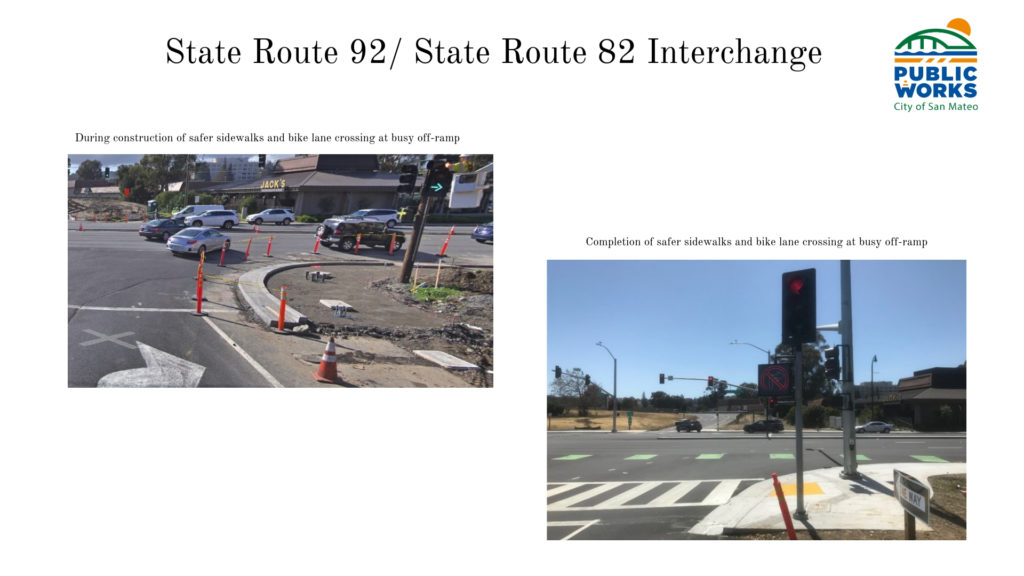 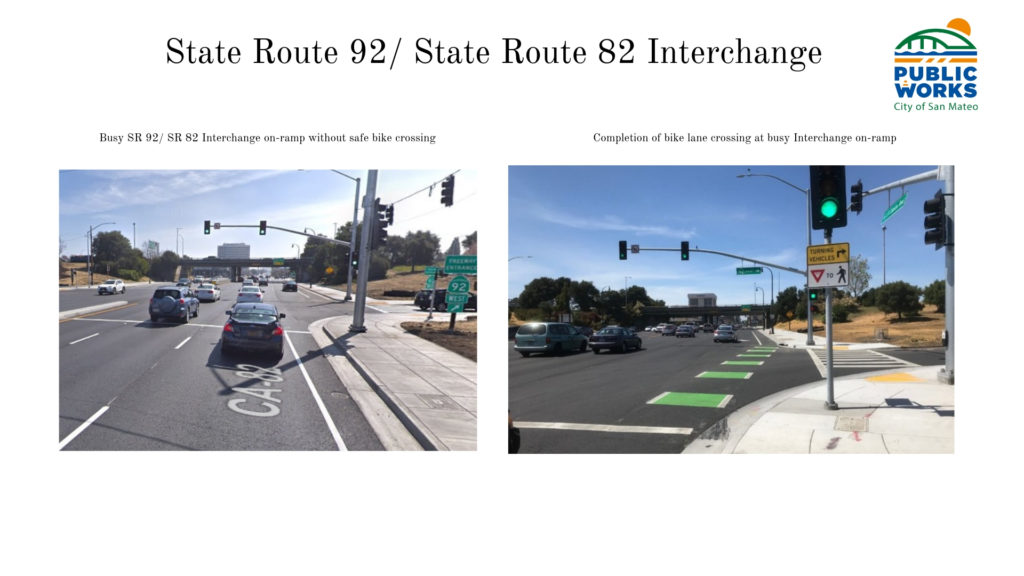 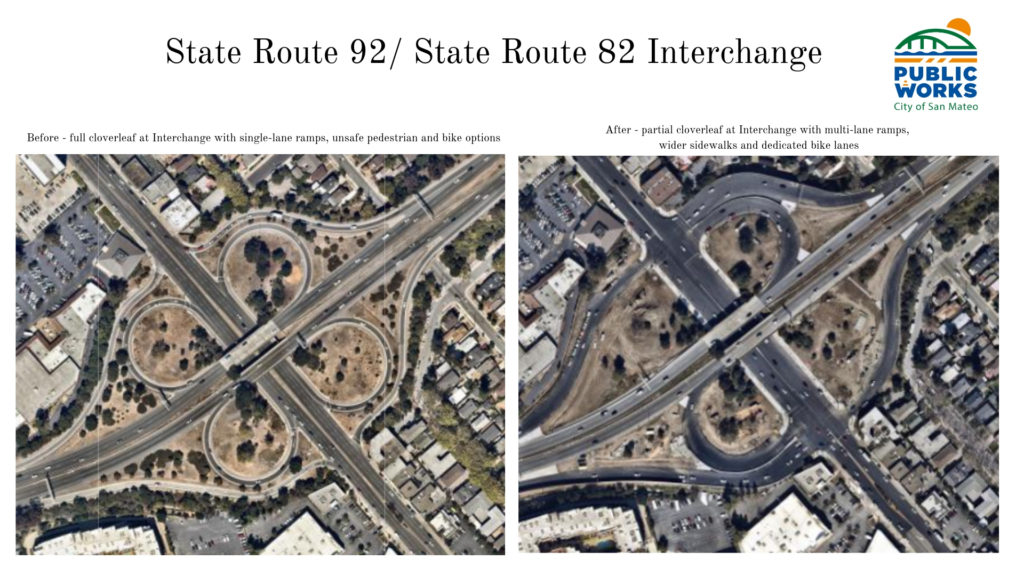 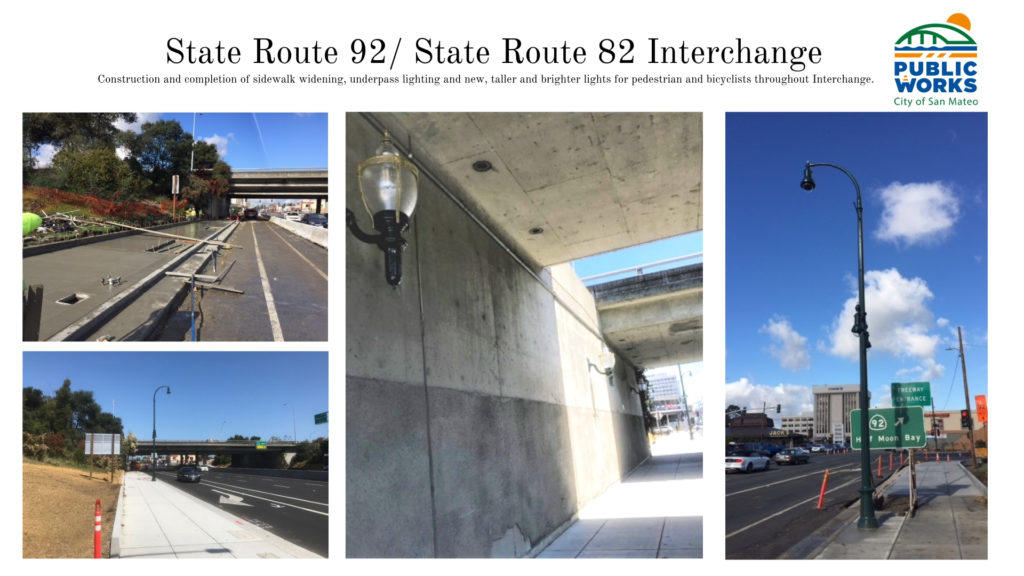