Mission Boulevard Phase 2 is a Complete Streets project to improve multi-modal access and is part of a three-phase improvement to a major north-south arterial corridor. Extending over 7-1/2 miles within the City of Hayward, the Mission Boulevard (Formerly Route 238) Corridor Improvement Project is the largest capital improvement initiative in the City of Hayward’s history and a high-priority regional transportation improvement project intended to alleviate crippling congestion through the City’s main arteries and to facilitate traffic regionally. Ultimately, the project is much more than an ambitious streets and roads project; the effort is transforming a severely congested and barren thoroughfare into an attractively designed community employing state-of-the-art traffic management technology, multi-modal infrastructural upgrades, significantly improved accessibility, increased energy efficiency and ladders of opportunity for the disadvantaged population living in the corridor. Phase 2 is the section of Mission Boulevard from Industrial Parkway to the south city limit at Blanche Street. See Exhibit 1. The construction of Phase 1 was completed in 2014. The construction of Phase 2 is near completion and Phase 3 is in the final design phase. Formerly owned by Caltrans and more recently relinquished to the City of Hayward, Mission Boulevard’s infrastructure was generally poor. There were missing or substandard sidewalks and curb ramps. The existing traffic signals and equipment were lacking or needed upgrades. Street lighting on there were on wood joint poles were insufficient. There were no designated bike facilities. The pavement condition was poor that included areas of ponding during rain. Improvements along the Mission Boulevard corridor were designed to improve multi-modal access. Specifically, improvements included access to accommodate pedestrians, bicyclists, transit users, motorists, and trucks. The Phase 2 improvements include new sidewalks, curb & gutter, permeable pavers, new storm drain improvements, pavement rehabilitation using Cold In-Place Recycling and overlay, new traffic signals with adaptive traffic management system, improvements to bus stops, new LED street and pedestrian lighting, underground of overhead utility lines, new Class IV bike lanes with raised islands, and landscaped median. See Exhibit 2 for a typical cross section. The improvements are consistent with the City’s Complete Streets Policy and also had the support from the community as well as Bike East Bay and AC Transit. The City Council awarded the construction contract on January 16, 2018 to Desilva Gates Construction in the amount of $22,675,106. Construction is near completion and is anticipated to be completed in April 2020. See Exhibit 3 for pictures before and after construction. 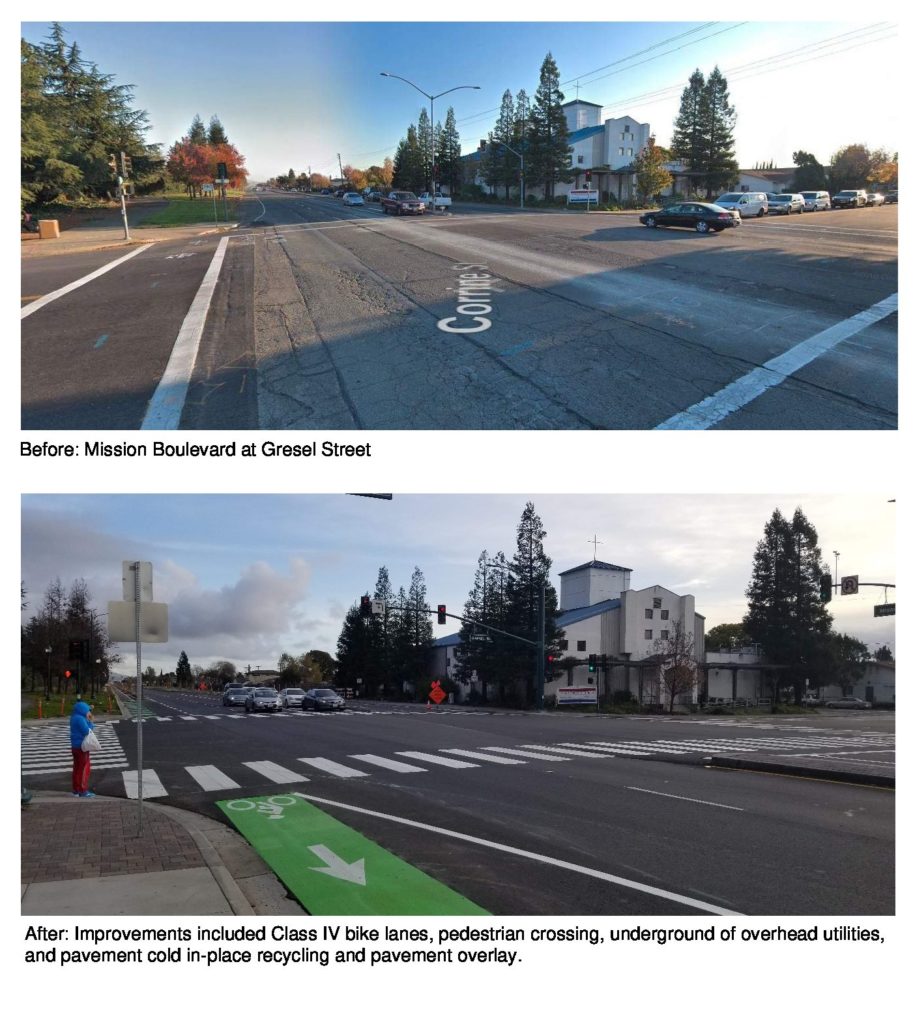